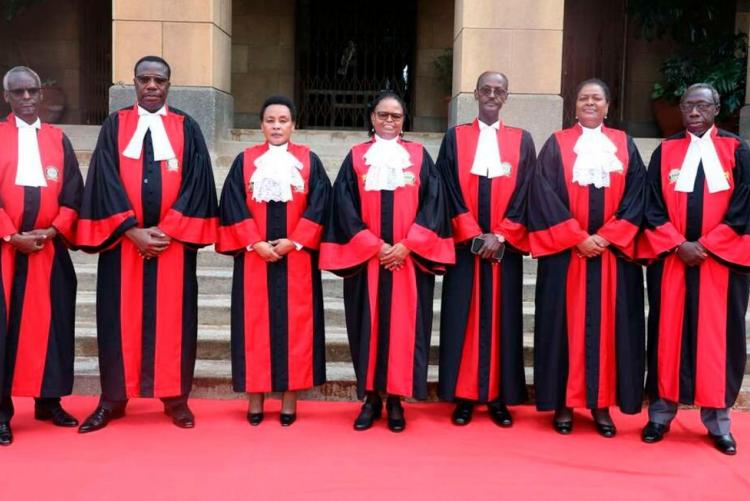 UoN continues to shine from the glory of its Alumni. The footprints of the impact by its alumni continues to be felt far and wide including the corridors of power. This was demonstrated during the just concluded 2022 presidential election petition that saw a huge representation of UON trained lawyers from both the bench and bar battle it out in the Supreme Court.

Honorable Lady Justice Martha Koome who is the current and first female Chief Justice of Kenya is one of the high-ranking UoN law trained graduates. She was appointed to the position of Chief Justice in May 2021. She graduated with an LLB from UON in 1986.  Justice Koome notes that because of scoring very high marks in school she was advised to study law. She further notes that the judiciary is a defender of human rights

Lady Justice Koome has risen against all odds to become Kenya's first female Chief Justice and President of the Supreme Court. ‘’I am a villager in the truest sense. My parents were peasant farmers and we were 18 children from two mothers. So, for all of us, especially girls - it was a struggle to overcome the odds." Notes Justice Koome in a past interview

Justice Koome record on children and gender rights as well as her role in drafting Kenya's 2010 constitution, in particular on the Bill of Rights, has continued to stand out. She has candidly spoken on how the current constitution now outlaws gender discrimination unlike the old one which discriminated against women".

Justice Koome is also a founding member of the Federation of Women Lawyers (Fida), which has since become synonymous with pro-bono representation of victims of gender and sexual violence in Kenya.

In 2020, she was a runner-up for the UN's Kenya Person of the Year Award "for her advocacy of the rights of children in the justice system”. She has also served as a commissioner on the African Union's Committee on the Rights and Welfare of Children.

During the 2022 election petition hearing, Justice Koome posed pertinent questions to the lawyers;

Why did the IEBC Chairperson deem it fit to allocate ‘domestic’ chores leaving the core business of IEBC to the CEO to supervise? Why did the live streaming of results stop?

Honorable Lady Justice Philomena Mwilu is the third Deputy Chief Justice of Kenya after succeeding Justice Kalpana Rawal. She was appointed on October 2016 and she has had a long career in the Kenya Judiciary, which spans for over 32 years

Justice Mwilu graduated from the University of Nairobi with Bachelors of laws and in 2018; she graduated with a Masters of Laws from the same institution. She was admitted as an advocate of the High Court of Kenya in 1984.

Justice Philomena Mwilu has a legacy of paying attention to issues pertaining to the welfare of her colleagues. While working at Eldoret High Court, she noticed that a number of magistrates had a drinking problem and so she initiated counselling and bonding sessions with judicial officers to assist them.

He was appointed a judge of the Supreme Court of Kenya on June 16, 2011. Justice Mohammed Ibrahim was the first from among the Kenyan Somali community to be admitted to the bar as an advocate

He attended the University of Nairobi where he graduated with a Bachelor of Law Degree. He was admitted to the Roll of Advocates on January 11, 1983

He has served, as a council member of the Law Society of Kenya and was actively involved in civil rights advocacy at the advent of the pro-democracy movement in Kenya

The judge has invested heavily both personally and professionally in securing rights for minority groups, particularly the Somali community in Kenya.

He fought against the discrimination of Kenyan Somalis when the government gazette the use of “pink cards” which were used to discriminate against the community.

He was also a founding trustee of the human rights organization, Mwangaza Trust, until 1994.

He holds a Bachelor of Laws (LL.B, Hons.) from the University of Nairobi. He was appointed a judge at the Supreme Court of Kenya in June 2012. Justice Smokin Wanjala has a sound education having been a lecturer at the University of Nairobi (UoN) Faculty of Law for nearly two decades (1986-2004). His educational background also contributed to his appointment as the director of Kenya Judiciary Academy (KJA) - which is tasked with the training of judges and judicial officers in the country.

While still lecturing at the University of Nairobi, he served as the Joint Secretary to the Commission on illegally and Irregularly Acquired Public Land (the Ndung’u Commission) in 2003.

He is also credited with having overseen the compilation and writing of what has become popularly known as the Ndung’u Report. He has many publications to his credit including books and articles in the fields of Law, Human Rights and Governance. He has published locally and internationally.

Justice Wanjala was actively involved in the struggle for Constitutional Reform in Kenya. He was one of the four founder members of the Centre for Law and Research International (CLARION), which is the body that pioneered Civic Education in the country

During the 2022 presidential petitions challenging the election of President-elect William Ruto, Wanjala offered much relief from the tense sessions by creating light moments that lit the courtroom

His works have over the years seen him get accolades. Wanjala is a holder of the Chief of the Order of the Burning Spear  (CBS) which was conferred to him in 2012 by the then President Kibaki

She has a law degree from the University of Nairobi. She also holds a Masters of Law (LL.M) in Human Rights and Civil Liberties and a diploma in Women’s Human Rights from the World University Services, Austria

Justice Njoki Ndungu was a nominated MP during the government of former President Mwai Kibaki between 2003 and 2007.The eloquent judge served on four committees in the ninth parliament and is credited for moving several private bills including the human rights amendments to the Refugee Bill, Amendments on Maternity and Paternity Rights in Employment Act 2007 and Sexual Offenses Bill, 2006.

In November 2013, Justice Lenaola was appointed by the UN Secretary General Ban Ki-moon as a Judge of the Residual Special Court for Sierra Leone.  In 2015, CJ Willy Mutunga presented an honorary membership award to Justice Isaac Leonala on behalf of East Africa Law Society (EALS). This is in recognition of his outstanding support and contribution to the development of regional jurisprudence and his exemplary service to the bench both in the Republic of Kenya and at the East African level.

He has served as Judge and Deputy Principal Judge of the Court of First Instance of the East African Court of Justice (EACJ) from 2011 to 2018.

He has also served in the Chancellor’s Visitation panel which was appointed by Dr. Vijoo Rattansi in 2016 to review the status and performance of the University and make recommendations.

He has come to be known to many as a humble and just judge. With over 33 years of legal experience, Justice Ouko is among the longest serving judicial officers. He graduated from the University of Nairobi with Bachelor of Laws degree (LLB) in 1986
he was a former Registrar of the High Court and administered the oath of office to the newly elected president, Mwai Kibaki, in 2002.

Justice Ouko has served as joint secretary of the Goldenberg Commission of Inquiry. His exemplary work earned him the highest service honors in the country – Elder of the Burning Spear and Chief of the Burning Spear. He spearheaded the report of the task force on judiciary reforms, which came to be famously known as the Ouko report. Many of the recommendations in the Ouko report were included in the 2010 Constitution, such as expanding representation in the Judicial Service Commission to include the Supreme Court, the Law Society of Kenya and the Kenya Judges and Magistrates Association, and laying down procedures for the removal and discipline of judges

The presidential petition started on with a pre-trial conference whereby the court identified nine issues to be addressed during the trial. The hearings began Tuesday and on Monday September 5th 2022 the 7-judge bench issued a unanimous decision that upheld Dr. William Ruto’s Victory