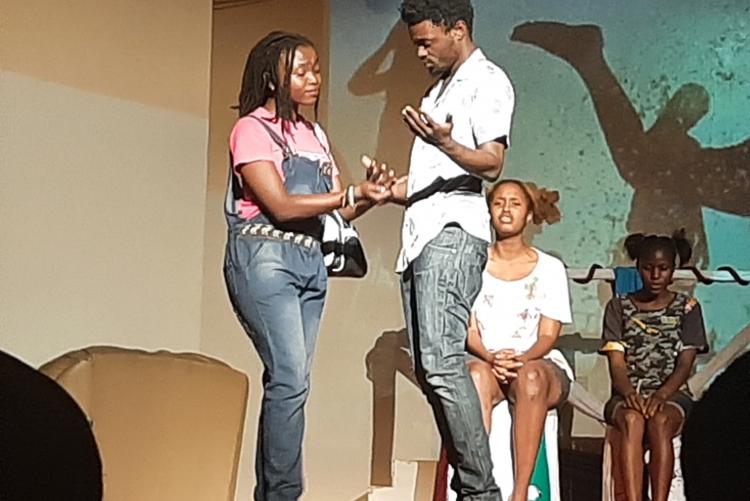 theatre of the absurd showcasing the play the cursetomary

The University Of Nairobi Theatre of the Absurd brought the monumental case of customary law to life by showcasing a play called ‘The Cursetomary the story of SM Otieno 1986’ a combination of comedy and horrific tragedy play.

Speaking during the event, the Vice Chancellor Prof. Kiama acknowledged that indeed UON is the home of talents. He noted the actors had reconstructed the play to bring out what was not picked and written in the newspapers during the court case that went through several hearings at the Kenya High Court and Court of Appeal. He also thanked and appreciated the audience for turning up to support the students.

The famous SM Otieno case tells the court battle between the blood families of the late criminal lawyer SM Otieno on where his body should be buried as it continuous to rest in the city mortuary for almost a year under heavy security vigilance. The widow Virginia Edith Wambui Otieno claimed that the lawyer’s wish was to be buried in upper Matasia their matrimonial home but the villagers from Nyalgunga claimed it has to be buried in his home village as per the customs of the land.

The producer of the play Mr. Silas Owiti a fourth year student at the faculty of law noted the inspiration for the play was to take the millennials back to the past. ‘’While I was a first year in the Faculty of Law, that was the first and most interesting case in the unit Social Foundations of Law taught by my lecturers Hon. Nancy Baraza and Dr. Kariuki Muigua. The story of SM Otieno was a phenomenal one and once I asked my parents the story, I realized it was something deeper than what we even learnt in school. I decided to take the millennials back to the past and also tell us the younger generation this story’’ Mr. Silas said.

The producer further noted the key message for the play was  Unity as a country regardless of the different cultures, ethnic backgrounds and beliefs.  ‘’The ethnic differences we've had as communities didn't start today; they had a source and the SM Otieno Case 1986 was part of the culture shock and source. Since ethnicity is a political matter, we also brought political satire throughout the whole play a political tensions continue rising. The main message through the whole play is that we should continue being united as Kenyans because we have one culture and that is to be a Kenyan and that some cultures should be extinct as per now and others appreciated in their own way’’ Mr. Silas noted.

It took 3 months to produce the Cursetomary since it was set to perform for the national festivals in Meru late October but due to unavoidable circumstances the group could not and so travel so they decided to take it up a notch and show the whole world what they do.

Since its inception in 2018, the drama society has continued being at the forefront in being a source of entertainment and learning by doing real stories from the past and debatable stories that uprise public interest and inspire the community.