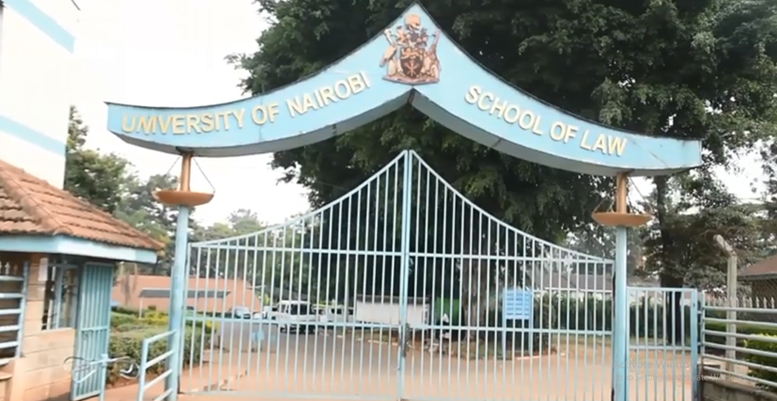 The premier Law school has evolved steadily from its earlier status as a mere department of the Faculty of Commerce in the 1960s, to a small but full-fledged Law Faculty in 1970, and is now one of the largest law schools in East and Central Africa. From the very beginning of its activities, the main task has been to train lawyers for the practice of Law in its multifaceted aspects. The School provides intending lawyers with the knowledge of the law required in professional practice, commerce and industry and central and local government services.

Today, the School of Law (Parklands Campus) has academic staff strength of 67 Lecturers, Senior Lecturers and Professors.Currently, there are 1,397undergraduate students. Every year, over 500 students graduate with the Bachelor of Laws degree (LL.B). About 50 students also graduate with Master of Laws (LL.M) degree and from 2010 we have at least two students graduating with the Doctor of Philosophy (PhD) in Law degree annually.

The School of Law is one of the units within the College of Humanities and Social Sciences of the University of Nairobi. It has three departments, namely, Public Law, Private Law and Commercial Law, each of which is headed by a Chair. The Academic and Administrative head of the School is the Dean. The highest policy making body at the school is the School Board which is chaired by the Dean and whose membership comprises all academic members of staff, a representative of the support staff, student representatives, the Chairs of the Kenya Law Reform Commission and the Law Society of Kenya.

The School has established a number of specialized committees and co-ordination offices to focus on specific areas of its mandate. These include the Academic Programmes Committee (APC) (which also has overall responsibility for external links and programmes), the Examinations Committee (EC), the Research, Library and Publications Committee, the Alumni Committee; the Anti-Corruption Committee and the Information and Communication Technology Office. The School has also established the Curriculum Committee; the Accreditation Committee; the Renovation, Refurbishment and Development Committee and the Moot Court Committee to augment the capacity of the Management Board and the APC and further streamline the operations of the School.

The School fully recognizes and appreciates its role in ensuring that legal and judicial reforms are properly grounded at the level of acquisition and dissemination of knowledge at the initial and continuing levels. The School is committed to offering the best legal training to the highest professional and ethical standards attainable.

It is also not lost on the School that it is well situated to serve the legal sector by virtue of its proximity to key stakeholders. With the ever-increasing levels of knowledge and practice, especially spurred on by globalization, the School is strategically positioned to offer research services, overall legal education as well as tailor-made courses that are responsive to the needs of the sectors concerned.

The School is therefore the leading source of professional legal excellence and skills in the country. Graduates from the University Of Nairobi School Of Law are already serving as members of the Cabinet, Parliamentary Officers, Judges of the Superior Courts, Chief Executive Officers in Public and Private Corporations and Legal Officers in the State Law Office, Public Corporation, Local Authorities and Private Business Entities. Several others are prominent legal practitioners, professors of law, lecturers and law instructors in a many of institutions.

The main objective of the School has been to run a national training programme for the legal profession, leading to the degree of Bachelor of Laws (LL.B.) after four (initially three) years of study.  Students wishing to take up law teaching as a career or to specialize in some courses or branches of law would have to proceed to higher degrees within the Faculty or elsewhere.

Although law studies at the undergraduate level are, by tradition, of a theoretical character, over the years pedagogical efforts have been made to provide and encourage experiential learning through simulation and activity participation in class, mock trials and international moot court competition. Besides, the School runs a Clinical Programme under which students are attached to subordinate courts, in order for them to appreciate the application of theoretical knowledge from practical experience. According to the recently reviewed curriculum (attached), the` focus areas have been expanded. Students will thus have the opportunity to be attached to institutions such as Non Governmental Organizations (NGOs), the State Law Office and the Deputy Public Prosecutor’s office among others.

The School of Law has maintained a distinctive character in its contribution to the legal profession and fraternity in this country. The School envisions being a centre of excellence in legal research, education, training and consultancy services in all areas of the law that are of local, national, regional and international significance. As the oldest and biggest School of Law in Kenya distinguished as a hub of legal scholarship, the School will contribute immensely to the implementation of the Constitution of Kenya 2010 and Vision 2030,

With the rapid growth in the student population, which currently stands at 1,397as indicated above, and with ever-growing interest in the study of law by members of the public, the School of Law has become the object of considerable legitimate expectations in terms of academic delivery.  Handy programme information, especially on undergraduate studies, has become a vital need from the standpoint of the School as well as the potential student. 1999 marked the commencement of a major expansion at the School with the establishment of the Module II Programme running in parallel with the traditional Module I Programme. This has greatly enhanced access to legal education but has brought with it unavoidable challenges. The School has addressed the challenges stoically and made improvements to the learning process in the quest for modernization.

The success of the School depends on all students and staff working together, and on an effective mainstreaming of the priorities and concerns into the wider University structure and administration.